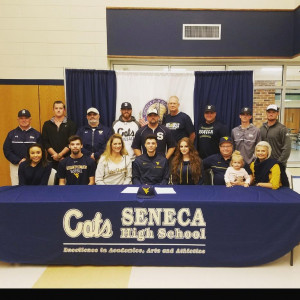 Seneca High School Senior Tristen Hudson (T-Hud) signed to play baseball with West Virginia this week. This picture includes Tristen’s parents, siblings, and coaches. Tristen is a phenomenal and dominant baseball player and was a major key to the Bobcats success last year. During the regular season Tristen led the Bobcats to a win against BHP, a team that the bobcats haven’t beaten in many years, as well as the 2015 and 2016 state champs. Tristen then led the bobcats to finish 3rd in the Upper-state tournament. Tristen’s goal this year is to lead the bobcats to a state title.

No Events This Week

Events are added by athletic staff.
View All Events